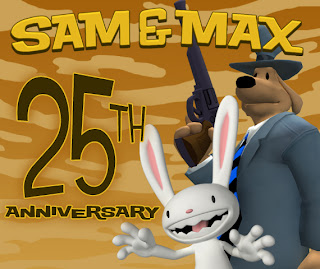 The first Sam & Max comic appeared in print 25 years ago. A few more followed, then some LucasArts strips, an Adventure Game, Trade Paperback, a Network Animated Series, a couple of unrealized games >snif<  but then...

Telltale Games jumped in. They were able to actually achieve something others couldn't, creating downloadable games on a schedule. Sam & Max were one of Telltale's early licenses. The series would be like a TV show, a few hours of gameplay for each installment delivered every month for the duration of the series. There have been three "seasons", Sam & Max Save the World,  Sam & Max Beyond Time and Space, and Sam & Max The Devil's Playhouse.

In between releases Telltale created Sam & Max shorts,  made sure the games could release on as many platforms as possible and nurtured a fan community. They also re-released my comics collection, Sam & Max Surfin' the Highway, and made sure the fans were supplied with Sam & Max
t-shirts, art prints and other doo-dads.

Everything Telltale learned from each game release they were able to apply to subsequent licenses, the most recent being The Walking Dead series which is a critical and commercial hit.

If you've yet to try Telltale's Sam & Max games they have a promotion celebrating the 25 years since the launch of the characters . You can find the details and the platforms listings HERE.

I've got some other things brewing (as you may have guessed) and will fill you in as they take shape. 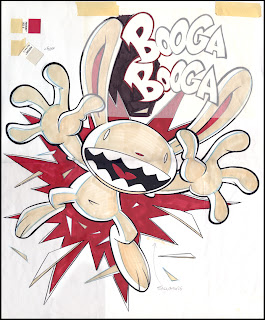 Here's the comp art for one of my old t-shirts. It was printed on a black shirt and was a very limited run.

Why's that you ask?

Well, my local shirt vendor (who I have never used again and had nothing to do with previous and subsequent Sam & Max shirts which were implemented in a entirely professional fashion) made the whole process more difficulty than you would think necessary.

The main offense was that he cut the original art into pieces to create the screens. When I protested, his response was, "Well you said you have a lot of those drawings!" I ended up screaming in his face which is very unlike me and his ultimate comment was "I think you're just one of those people who can't be pleased." Rather than leave with nothing I cut the order to the bone and sold the shirts with the caveat that they "have enough ink on them to stop a bullet".

People seemed to like the idea of the shirt, though. And I've thought about re-releasing it with revised printing. Maybe the image huge on a light shirt or lose the crashy hole concept from it or age it so it looks like it's been washed many times since the 80's? Working on some new ideas as well but, what do you think? Would you consider wearing some version of this?
Posted by Steve Purcell at 5:28 PM 30 comments: 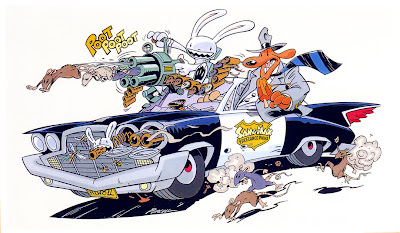 I did this ink and marker image to help promote the Sam & Max animated show for Fox Kids in the 90's.

Since the network frowned upon the use of actual pistols in the series I tried to think of a solution that was creepy or weird enough to replace the guns, hence the Rat Gat, a gatling gun designed to fire living vermin.
Posted by Steve Purcell at 1:40 PM 6 comments:

From the Dust Bins of History... 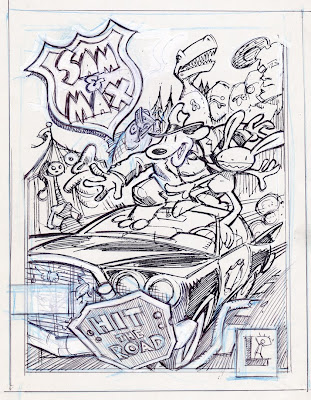 The Lucasfilm adventure game Sam & Max Hit the Road was first released in 1993.
Here are a few of the rough sketches I scratched around with in search of the properly lively final "driving and antic-ing" concept for the box cover. The Highway Surfing version (above) eventually became the cover of the Sam & Max comics collection and the sasquatch in the ice block idea (below left) was repurposed as a trading card for I can't remember what.

I don't seem to throw anything away. 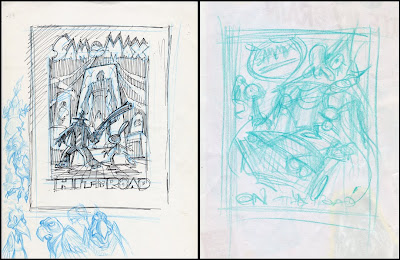 Weirdly enough, San Diego Comic-Con weekend occasionally makes me think of comics, and my own sporadically spastic dabblings in the funny book arts. The first published Sam & Max comic appeared on the stands just 25 years ago. Since then, the deranged little critters have clung to survival like a pair of mutant sewie rats, jumping aboard any form of media they could sink their nasty little claws into. But what lies in their future? What bits of folksy, gentle Sam & Maxish whimsy shall be revealed in the dawn of the next 25 years? And if you had a say, what would you want it to be?
Posted by Steve Purcell at 2:28 AM 81 comments: 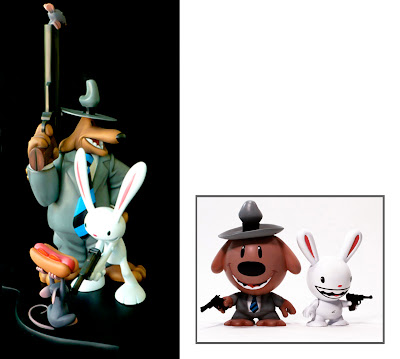 I don't have an online store (yet), but if you crave the tangible physical presence of Sam & Max in your home, you can find these lovingly realized figures at SYMBIOTE STUDIOS.

Place them next to your wallet to attract magical Feng Shui money spirits or in the trunk of the car to bludgeon bothersome election year petitioners. Tie one to your deceased pet to keep it submerged in the pond or buy dozens to shoot off your fence posts with a 12 gauge.

Enjoy! And enjoy some more!
Posted by Steve Purcell at 12:19 PM 8 comments: 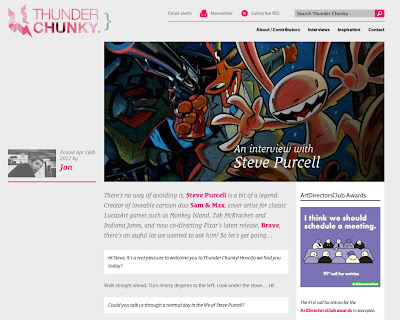 Here's an INTERVIEW from a U.K. site about Sam & Max mostly and a bit about my day job.
Posted by Steve Purcell at 9:04 PM 4 comments: