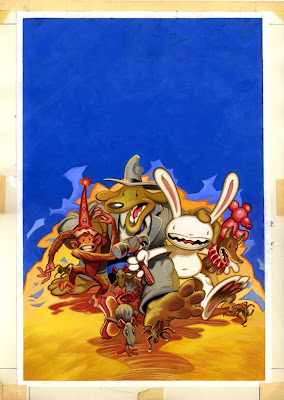 When classic, long defunct, Amazing Heroes magazine decided to do a humor issue and asked to have Sam & Max on the cover we joked about what a hard sell humor comics were in general and why a special humor issue would probably be an underperformer. 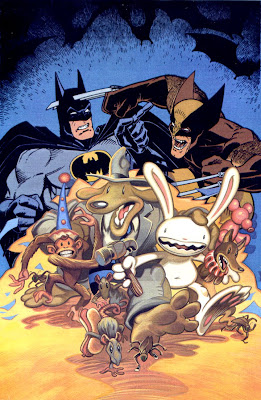 Somehow I was able to persuade fan favorite Arthur Adams to do an interpretation of two of the most popular mainstream comic characters at the time. The high concept being that when the top third of the cover was visible on the magazine rack, you'd see Batman and Wolverine depicted by your favorite comic book artist of all time! Once revealed, crashing through the image we would see Sam & Max joined by some random frolicking animal pals. Seemed like an excellent idea at the time.
Art's ink drawing was made into an acetate overlay with flat painted color laid in behind it. I assume I asked Lois Buhalis, my official Sam & Max letterer to create the dialog balloons but it's been awhile and some of those memory cells, liked dried-up silverfish exoskeletons, have sadly blown away over time (Lois, help me out here). 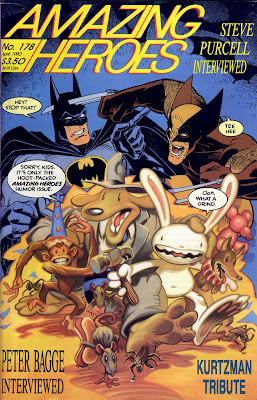 Once you had the mag in your hand, our job was done, hoping it would be too much trouble to put it back or maybe in your confusion you'd make it to the cash register before you realize you've been duped. The final cover is pretty noisy. I probably could have done a better job of the "rip through" effect but overall I like the cover and reused the Sam & Max painting as the back cover of the first Surfin' the Highway collection.
Batman and Wolverine by Art Adams - Pencil and Ink on Bristol Board 11X12
Sam & Max half - Gouache - 11X12
Posted by Steve Purcell at 1:06 PM 7 comments: 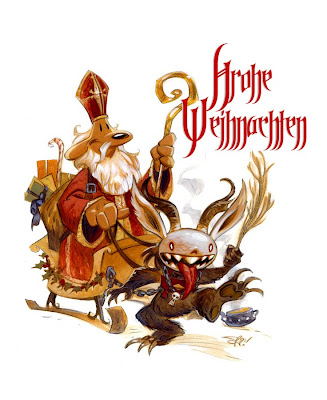 The Claus that Refreshes 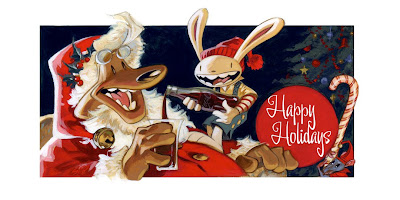 I think this one is from a couple of years ago. A tribute to the illustrator Haddon Sundblom who in his advertising paintings defined our impression of the "modern" Santa Claus. I love his effortless paintings and it was a fun exercise to use his colors and try to capture a bit of the feel of his stuff. Acrylic 4X8
Posted by Steve Purcell at 11:28 AM 5 comments: 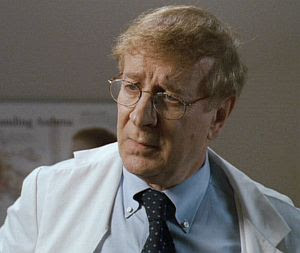 Actor Steve Landesberg passed away on Dec 17th at age 65. Why do I post that information here on the official Sam & Max blog? Because Mr. Landesberg was my original casting choice to play Sam in LucasArts adventure game "Sam & Max Hit the Road". While casting the characters in the game, Steve Landesberg occurred to me because of his ultra dry delivery and his easy way of firing off chains of obscure facts. LucasArts put in the call but we never made it past his agent. And that was that.

I subsequently sifted through a flood of tapes from various actors and landed upon the great Bill Farmer who took the character of Sam in a direction that I loved, so I certainly have no complaints about where we ended up.

Steve Landesberg left a lot of fine work behind. Here's a short clip of his character, Dietrich from the Barney Miller show. 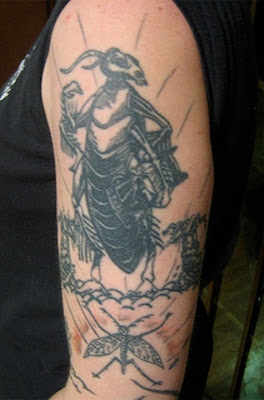 I like this tattoo a lot. It uses my roach pin-up from Bad Day on the Moon and depicts it almost like a religious icon. It includes some other insectoid elements I had nothing to do with but have a flavor of Windsor McCay or the Freak Brothers. I don't know who owns this tattoo. Let me know who you are if you like.
Posted by Steve Purcell at 11:12 AM 2 comments: 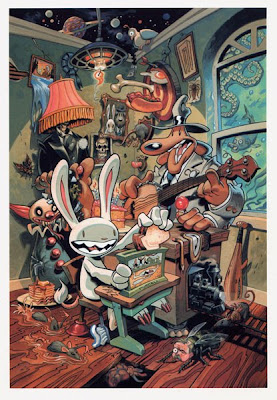 This painting was printed in an edition of 1000. The image was originally created as a fold-out poster for Fox Kids when the Sam & Max animated series was on the air. For whatever reason I thought it would be fun to do a "what's wrong with this picture" idea. The poster was done as an ink drawing with rough marker color guide for the digital colorist to refer to. A collector bought the ink drawing so before I shipped it to him I had it reproduced onto illustration board so that I could paint on top of the line drawing with acrylics. 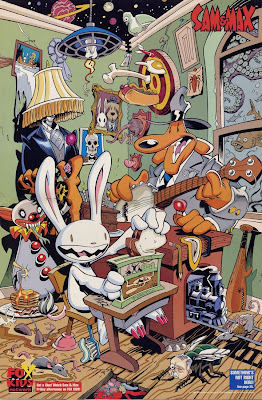 When I wrote the the legend I decided to make the call-outs completely incongruous. I don't have a clue if any of the tiny readers of Fox Kids magazine laughed or could even make head or tail out of any of this. At the time it never occurred to me to worry about it, though if I was to do it all again I would only rethink my use of the half-assed term "wacked-out". 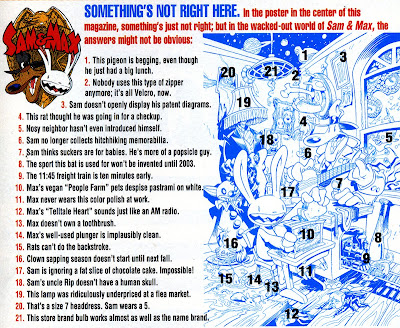 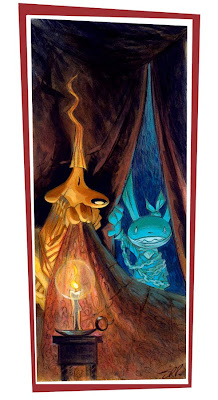 Here's another installment from the Christmas Card archives. I love depicting Sam & Max as Dickens Characters. I have a new one in mind for this year casting Max as Scrooge further along in the story. Acrylic 5X9
Posted by Steve Purcell at 10:28 AM 7 comments: 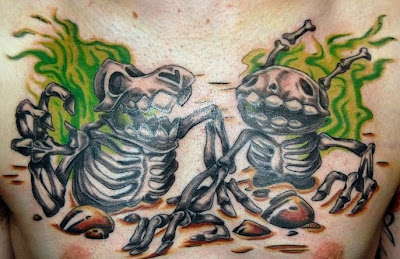 Here's a handsome installment to our Tattoo gallery which comes from Mark Gillie. It's an image that I created for the animated series adapted in loving, gory detail for daily wear.
Ink on human flesh 9X14
Posted by Steve Purcell at 2:25 PM 6 comments: 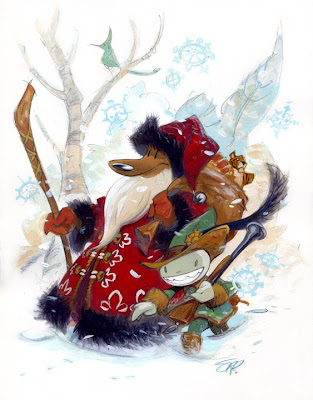 On the coming weeks I'll post a few Christmas card paintings from previous years. Here's one I was pretty happy with. Sometimes the paint just goes down the way you want it to. It was especially fun cobbling together a folksy Santa costume from old reference material and with Max as a huntsman it all ended up with kind of a Russian feel. Acrylic 8 1/2 X 11
Posted by Steve Purcell at 10:24 AM 8 comments: 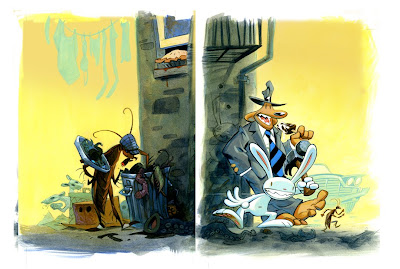 Here's the back/front cover painting for the Shout Factory Animated Series DVD. I was pretty happy with the way the paint went down. Using acrylic rather than watercolor I sometimes apply too much paint and end up plastering instead of painting. I spent my young life gazing at paintings by Jack Davis who could seemingly do lively and beautiful wash paintings in his sleep. I'd still love to be able to nail them the way he can.
Acrylic 13X20
Posted by Steve Purcell at 12:50 PM 11 comments: 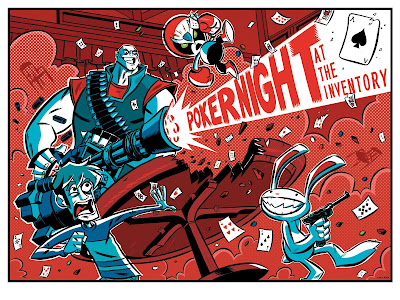 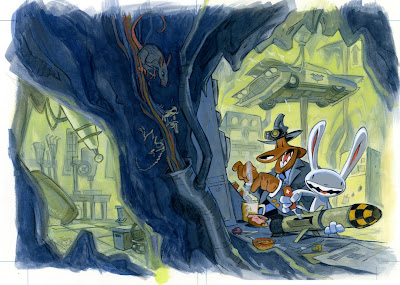 I stuck something in this DVD cover painting for detail-oriented conspiracy theorists. It includes two levels of obscurity. Any thoughts?
Posted by Steve Purcell at 3:18 PM 24 comments: 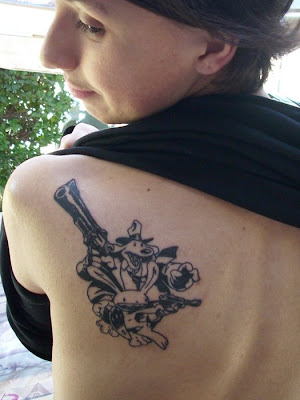 For the first installment of Tattoo Friday here is a recent acquisition by Sam & Max fan Nicole Cancio, who I once met at ComicCon sporting an amazing home built Sam & Max costume. The idea of fans having my characters scribed on their bodies used to make me dizzy but now I wholeheartedly embrace it. If you have 'em send 'em to stevepurcell@hotmail.com.
Posted by Steve Purcell at 9:30 AM 12 comments: 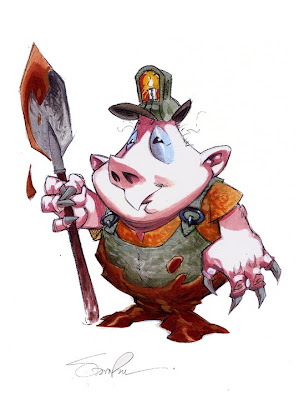 Speaking of "Plunge Through Space", here's a character design-- a hapless Mole Miner enslaved with others of his kind to extract the yummy nougat from the center of his planet. 8X10 Acrylic
Posted by Steve Purcell at 8:31 AM 5 comments: 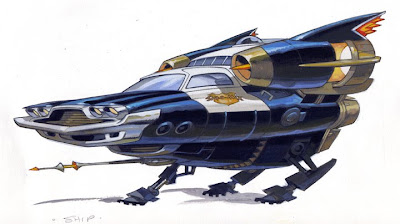 Sam & Max's custom space-traveling modified DeSoto from the game/movie concept "Sam & Max Plunge Through Space." One of my favorite aspects of the PC game design for the Desoto controls; every key on the keyboard would have a function, however bizarre. Acrylic 8X10.
Posted by Steve Purcell at 1:38 AM 31 comments: 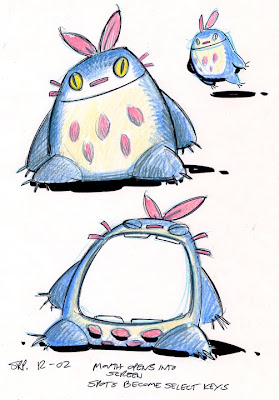 Here's an unused god-knows-what for some unpublished something-or-other. He's both living and a device and would appear to be imported. Here's a short exchange of him interacting with Sam & Max:

In my world we’d torch that abomination before it thinks up a catchy jingle.

Sam pets Gytgo’s head as Gytgo’s music starts again. Gytgo sings a jingle in Japanese while colorful subtitles dance across the bottom of the screen. Max plugs his ears.

Here we go on a sword of rain

To fight onto a slippery day

-as he puts Gytgo away. 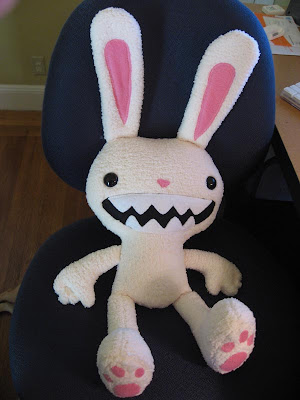 Here's a great little soft sculpture of Max by artist Anna Chambers. I asked her to interpret Max in the style of her own work. I think this would be a neat doll to manufacture though I'm still interested in doing a more stock version of Max as well. For a very long time I've owed her a painting in exchange for this piece and I'm hoping that by posting her creation here I can jar myself into action and that she'll forgive me for making her wait.
Posted by Steve Purcell at 7:20 PM 27 comments: 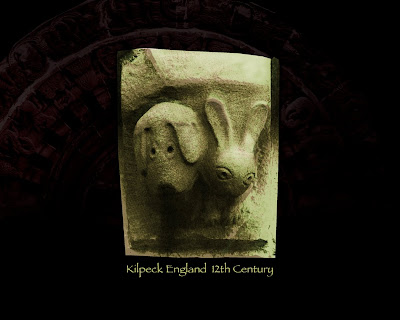 Welcome to the first post of the Official Sam & Max blog. I'm posting this cryptic image because it was the placeholder for the Sam & Max website I had planned to do years ago. During an unfortunate glitch with the domain holding entity, samandmax.com was poached by unscrupulous forces who are using it to sell God knows what, and my dream of an official site went into cryogenic stasis.
Ah, what the hell! Blogs are easier to maintain (especially for a slow-witted troglodyte like myself) anyway. I've somehow managed to maintain my other blog, Spudvision, at a fairly consistent pace for quite awhile now, and it seemed like it was high time to kick a Sam & Max blog into gear.
In my mind this photo shows the very earliest inadvertent roots of Sam & Max. This photo was sent to me by a fan, copied out of a U.K. travel guide. It's a real corbel carved for an ancient church and if it wasn't for the little dangly arms on the bunny, I might be more inclined to think it an odd coincidence. As it is I can only call it destiny. Some precognitive image-making on the part of a work-for-hire, bog person, sub-minimum wage, stone-carving drone.
Something spoke to him, he realized it in sculpture, was most likely fired or executed shortly thereafter, and then it took only 800 years for the idea to take root and flourish.
All I can say is "thank you Mr. stone-carving bog drone!"
Posted by Steve Purcell at 1:56 PM 12 comments: