What Kind of Dog is That? 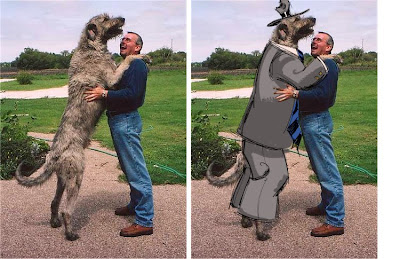 In art school I was working on a Sam & Max weekly strip and one episode found Sam & Max walking down the street hallucinating on cherry pie that had been drugged. In one panel they see each other as real animals and I found myself trying to figure out what kind of a dog Sam would be. In the same way Foghorn Leghorn claims to be a Rhode Island Red, Sam from that point on became an Irish Wolf Hound. The proportions don't quite add up but he's well in the ball park I would say.
Posted by Steve Purcell at 1:46 PM